Recorded at the Lensic Theater in Santa Fe, New Mexico on November 11, 2015. 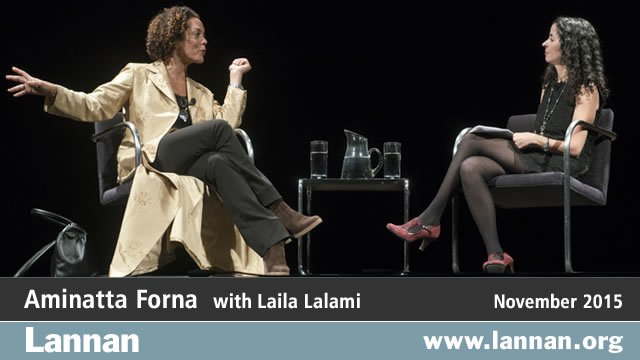 This event was part of the Lannan Literary series.

Aminatta Forna is the award-winning author of the novels The Hired Man, The Memory of Love and Ancestor Stones, and a memoir The Devil that Danced on the Water. She was born in Scotland, raised in Sierra Leone and Britain, and spent periods of her childhood in Iran, Thailand and Zambia. Her latest novel, Happiness, weaves together the lives of a Ghanian psychiatrist and an American studying urban foxes in London.

Forna first gained serious literary attention for her memoir, The Devil that Danced on the Water, in which she investigates the murder of her father, Mohamed Forna, a rising star in Sierra Leone’s fledgling democracy. Her novel, Ancestor Stones, encompasses a sweeping view of Africa in the 20th Century, told through the story of Abi, newly returned to Africa from England. Forna’s second novel, The Memory of Love, is set in contemporary Sierra Leone at a hospital where the patients are coping with the wounds—both physical and psychological—from the previous century’s Civil War. Of her recent novel, The Hired Man, John Freeman of The Boston Globe wrote, “Not since Remains of the Day has an author so skillfully revealed the way history’s layers are often invisible to all but its participants.”

Forna is currently Lannan Visiting Chair of Poetics at Georgetown University. She is a columnist for The Guardian and was a judge for the 2013 International Man Booker Prize. In 2003, Aminatta established the Rogbonko Project to build a school in a village in Sierra Leone. The charity now runs a number of projects in the spheres of education, sanitation, and maternal health.