Recorded at the Lensic Theater in Santa Fe, New Mexico on September 21, 2016. 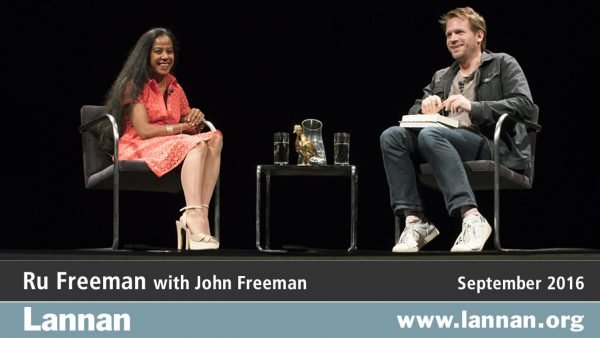 Ru Freeman is a Sri Lankan-born writer and activist whose creative and political writing has appeared internationally. She is the author of the novels A Disobedient Girl (Atria/Simon & Schuster, 2009) and On Sal Mal Lane (Graywolf, 2013), a New York Times Editors’ Choice. On Sal Mal Lane takes place off a major road in the Sri Lankan capital of Colombo, home to Sinhalese, Tamils, Burghers, and Muslims. Of their differences, Freeman writes, “To the untrained eye, the physical distinction between the Sinhalese and the Tamil races was so subtle that only the natives could distinguish one from the other, pointing to the drape of a sari, the cheekbones on a face, the scent of hair oil to clarify. But distinctions there were, and the natural order of things would eventually come to pass: resentments would grow…” Both of Freeman’s novels have been translated into several languages, including Italian, French, Hebrew, and Chinese. In 2015 she edited the anthology Extraordinary Rendition: (American) Writers on Palestine, bringing together the work of 65 writers and poets. She blogs for the Huffington Post on literature and politics, is a contributing member of the Asian American Literary Review editorial board, and has been a fellow with the Bread Loaf Writers’ Conference, Yaddo, Hedgebrook, and the Virginia Center for the Creative Arts. She is the 2014 winner of the Sister Mariella Gable Award for fiction and the Janet Heidinger Kafka Prize for fiction by an American woman. Freeman was a Lannan Residency Fellow in the winter of 2016.