Recorded at the Lensic Theater in Santa Fe, New Mexico on October 26, 2016. 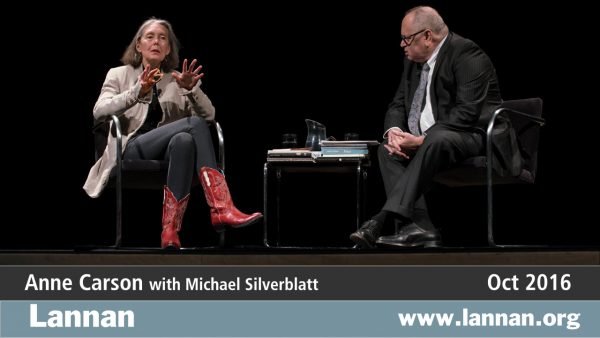 Anne Carson is a Canadian poet, essayist, and professor of classics as well as a translator. Her first book, Eros the Bittersweet (1996), traces the concept of eros from ancient Greece to the present. She writes in this book, “The words we read and words we write never say exactly what we mean. The people we love are never just as we desire them. The two symbola never perfectly match. Eros is in between.” Her book Autobiography of Red (1998) is a verse novel inspired by the Greek myth of Geryon and Herakles, set in the modern world. She has published nearly 20 books of poetry, essays, and translations, including An Oresteia (2010), which presents the stories of Agamemnon, Elektra, and Orestes. Carson received a Lannan Literary Award in 1996, a Guggenheim Fellowship in 1998, and a MacArthur Fellowship in 2000. She is an artist-in-residence at New York University, and teaches in collaboration with her husband, Robert Currie. In 2014 Carson published Red Doc, where her characters Geryon and Herakles from Autobiography of Red return. In this book she warns, “To live past the end of your myth is a perilous thing.”