Recorded at the Lensic Theater in Santa Fe, New Mexico on February 15, 2017. 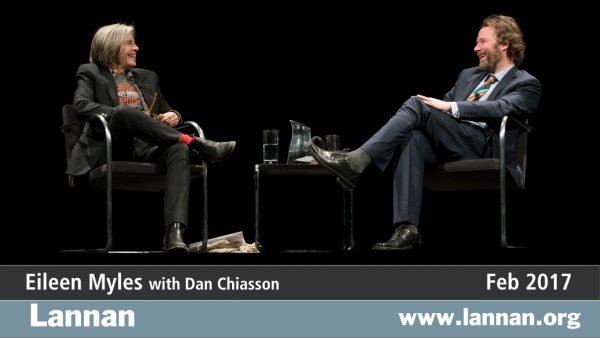 Eileen Myles is the author of more than a dozen volumes of poetry, fiction, and nonfiction, including Snowflake/different streets, Sorry, Tree, Chelsea Girls, Not Me, Skies, Cool for You, The Importance of Being Iceland: Travel Essays in Art, and Inferno: A Poet’s Novel, winner of the Lambda Literary Award for Lesbian Fiction, and coeditor of The New Fuck You/Adventures in Lesbian Reading. Her autobiographical novel Chelsea Girls, originally published in 1994 and reissued in 2015, brings together snapshot-like memories from her 1960s Catholic upbringing with an alcoholic father, her difficult teen years, her committed embrace of lesbianism, and her life as a poet in 1970s New York, which she describes as “a glowing cord of drunkenness and sex.” Myles’s book I Must Be Living Twice: New and Selected Poems 1975-2014, was described by John Ashbery as being “like a gasp of fresh air in the turbulent urban environment she writes from.” Myles has received a Guggenheim Fellowship, a Warhol/Creative Capital Arts Writers Grant, and the Shelley Memorial Award from the Poetry Society of America. She contributes to a wide number of publications, including ArtForum, Bookforum, Parkett, and The Believer. Myles lives in New York and Marfa, Texas, and is a professor emeritus at the University of California-San Diego.